The old man won’t stop snoring, and when I thought it couldn’t get worse the lady started in too. They sound like machines. Big loud ugly machines. I’m just laying here trying to sleep for a few minutes, you know – just a little cat nap – and they can’t even breathe properly.

I moved rooms to try to get some peace and quiet, but the old cat is almost worse than the two humans combined. He’s sprawled out on his back with his legs splayed all over, and there is drool coming out the side of my mouth. If he weren’t snoring so loud I’d think he was dead. 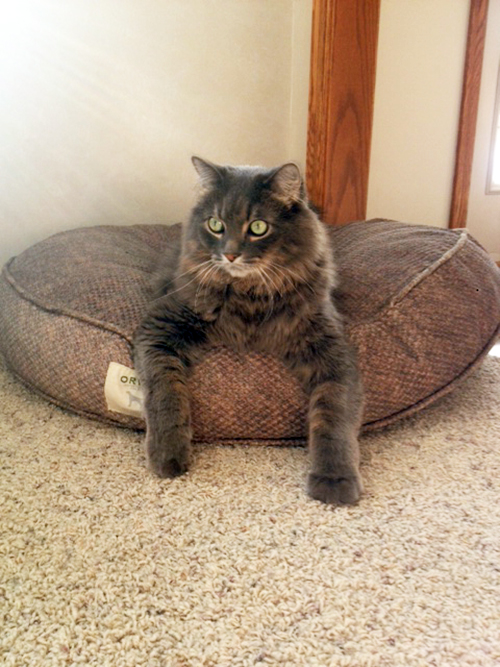 The lady doesn’t understand why I wake her up at 4:00 in the morning. Well, it’s because I can’t get a moment to sleep with the three of them making a snoring symphony. I’m also very hungry. They don’t leave food out for me anymore because I eat it all immediately. What’s there to do besides eat around here anyway? They spend all of their time sitting around laughing at me and trying to hold me on their lap. I am not a lap cat. I will never be a lap cat. You can hold the old cat, but I’m not interested in being your stuffed animal, folks. I try to engage them in a game of fetch but they don’t understand that they need to go get the ball again after they throw it. I do not retrieve.

Jasper is a disgruntled 6-year-old cat who lives in the suburbs of Minnesota with his two human parents. He’s the king of his domain and is easily upset by a disruption in order. He rules over two other animals: an 18-year-old cat named Max and a 13-year-old dog named Buddy. With the majority of his household winding down into retirement, Jasper keeps things interesting while lamenting his disdain and annoyance for his housemates in his private diary.