I heard my mom complain that she doesn’t understand why I need her to wake up at 4:00 in the morning every day. I don’t see what the problem is; I try to be nice about it at first. I stand at the edge of the bed and watch her sleep. I’m quiet; I just stare. If she still doesn’t get the picture, I jump on the bed and I sit on her head. I shove my paws in her hair and kneed. I’m doing her a favor – who doesn’t want an early morning head massage? When she REALLY doesn’t get it, I start knocking her things off the bedside table. Everything. The clock, her jewelry, her books, knick knacks, whatever will make a loud noise. 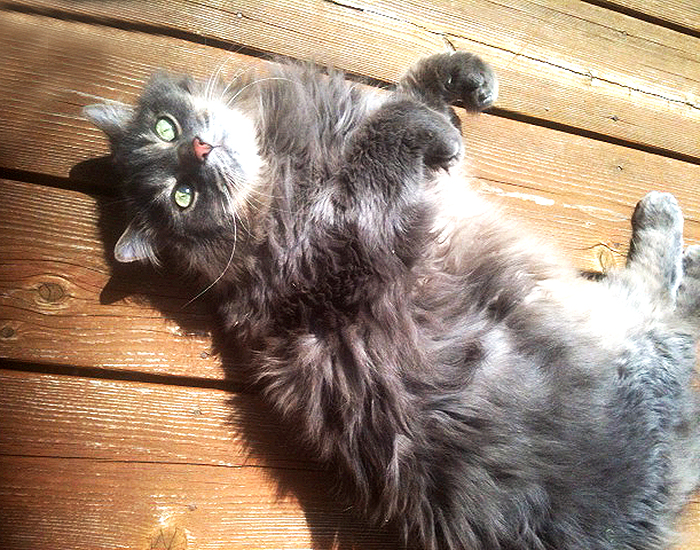 She doesn’t understand how hungry I am at this point. I’ve spent the entire night staring at a wall and listening. It takes my full concentration and patience to decode the mice language that escapes from the cracks in the walls. I listen to them plot their attacks and their pillages on our food cupboard.

She doesn’t think my job is important for the household. Well who’s going to be the one to save her when they stage a siege? I will. She’s the one wasting her time sleeping while the entire house is under impending attack. I know I could catch a mouse if I saw it. The dog thinks I’m not fast enough, I’ll prove him wrong. But I can’t do it if my mom doesn’t wake up and feed me at 4:00 am. I will make her understand.

Jasper is a disgruntled 6-year-old cat who lives in the suburbs of Minnesota with his two human parents. He’s the king of his domain and is easily upset by a disruption in order. He rules over two other animals: an 18-year-old cat named Max and a 13-year-old dog named Buddy. With the majority of his household winding down into retirement, Jasper keeps things interesting while lamenting his disdain and annoyance for his housemates in his private diary.