What can I say about that cute little ball of gray and white fur I first saw curled up in the sun on my aunt’s front yard. While your wild brothers and mother scrambled for the safety of bushes, you just continued to lay in the sun blissfully ignorant of the human approaching. That should have been a clue about your intellect. As I scooped you up in one hand and brought you home, little did I know that one day you would tip the scale at the vet clinic with your weight, literally.

In the nine years you have blessed this house with your antics, let’s recount some of the more memorable occasions.

You discovered yarn at about seven months of age and missed your first Thanksgiving because you were at the vet and I was hoping the yarn you ate, most likely thinking it was spaghetti, would come out the other end. I tried explaining that yarn was for mom to use to make nice things like blankets and sweaters for people but did you listen? Well, maybe. But there we were five years later with a more serious incident. You ate more yarn, three feet of it as it turned out, and by that time you were large enough that it took liposuction just to get to your tummy to pull it out. Not to mention the tummy tuck you also received. At least you no longer literally tip the scale at the vet. 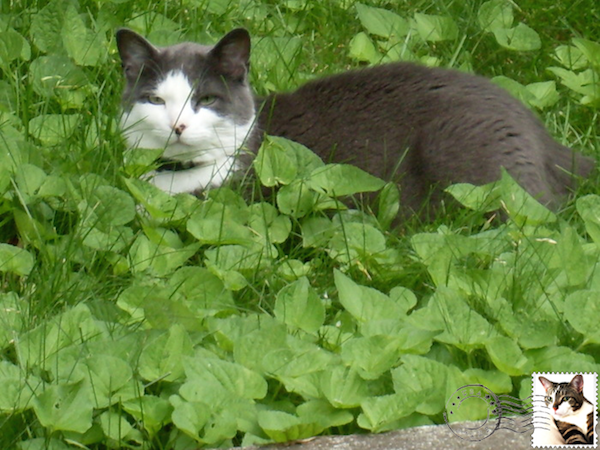 Now let’s talk about bread. Bread is for humans to eat, not kitties that have had liposuction and tummy tucks. As I’ve said, if bread sniffing and eating were Olympic events you’d win the gold. Please be kind to me though and restrain yourself when I absent mindedly forget to immediately put the bread away when I return from the grocery store. I’ve seen far too many loaves of bread that you’ve bored mouse sized holes into.

Moving on to geese. They can do you no harm when they fly over the house honking. You don’t have to dive under the bed in terror.

And the latest, taking a toy and pulling it across the floor doing the Moon Walk. What’s that all about?

But for all the headaches and expense, you are a constant source of amusement, a treasure for sure and Iâ€™ll never regret bringing home that little ball of fur that was so blissfully napping in the sun. Here’s to at least another nine years.